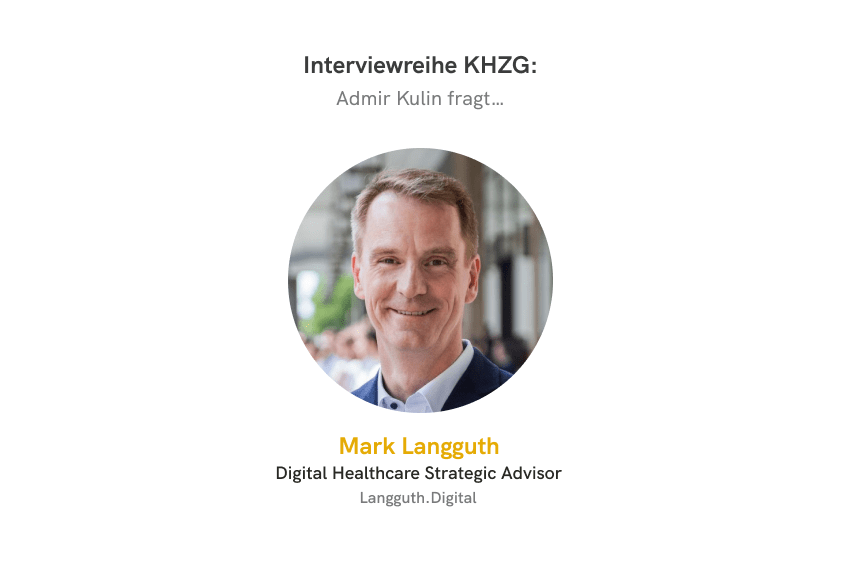 He spent almost 13 years at gematik, the German “Digital Health Agency,” and now works as a strategic consultant. Accordingly, Mark Langguth once again looks at the KHZG from a completely different, rather indirect perspective – and thus brings a new view of funding than the previous interviewees in the interview series had.

Mr. Langguth, let’s start the interview directly with a vision of the future: The focus of the KHZG is on patients, who should be able to move through the various sectors of the healthcare system in the future. Will this really generate added value for the entire system?

Digitization and networking should ensure, quite fundamentally and independently of the KHZG, that I, as a patient, have easier access to my data, contacts, and also to administrative processes that previously took place in paper form and were therefore perhaps more difficult for me, as a patient, to understand. In concrete terms, this means that digitization can be used to provide users with up-to-date information in their own language, something that was previously not possible on paper to the same extent. Accordingly, digitization makes it much easier to create transparency for patients. As a patient, for example, I can easily see what has been recorded about me as a patient. What do doctors and nurses document? What does my vital data look like? What was prescribed – yesterday and a year ago? How do these values correlate? At the same time, it’s much easier for me as a patient to be actively involved in my own medical care, for example through documented self-observations. Digitization therefore ideally informs and empowers patients, and in my view this results in significant added value for the entire system.

Wouldn’t this patient empowerment also be possible on paper – at least in theory?

Combined with a considerable amount of additional work, certainly. The beauty of digitization is the data that can be collected and processed in a structured way to create the added value I described earlier. A simple example is the doctor’s letter. It is written by doctors for doctors. As a patient, I need a translator to understand the content. However, if the underlying data of this doctor’s letter has been recorded in a structured way, the receiving doctor can be offered a continuous text for reading at the end, as usual, if desired. However, I can also generate a brief from the same structured data that patients understand – automatically. And this is exactly where holistic digitization begins to take effect. It increases transparency, understanding and, on this basis, the chance of greater adherence.

In your opinion, what conditions must be created for digitization to have this effect?

Ideally, processes would have to be thought of in digital terms from end to end. Today, unfortunately, we still tend to see the electrification of analog processes. This also applies to the involvement of patients. Open Notes in the USA is a good example of what can be achieved with comparatively simple means. There, participating physicians make their treatment notes available to their patients. Without changes, exactly what is noted. And this has not only increased transparency for patients, but also raised the relationship between the medical profession and its patients to a whole new and even more trusting level. At the same time, as OurNotes continues to evolve, patients are playing self-reported findings and questions back into the systems of their doctors, who are talking about better patient collaboration and simplified treatment as a result. An overall better understanding of one’s own state of health, together with the opportunity to actively participate, therefore also pays off positively in terms of recovery. In Germany, we have not yet reached the point where information can flow freely. But the KHZG, with its mandatory and optional criteria, is already moving in this direction.

When we talk about a permeable flow of information, the KHZG is probably not enough. How can such permeability between the different sectors of the healthcare system succeed?

The electronic patient record (ePA) is a key component of a patient-centric, cross-institutional and cross-sector flow of information. Although this has formally been in place since the beginning of the year, it will not be mandatory for doctors’ practices to be connected until July 1, and for hospitals until January 1, 2022. Only then will the ePA be able to play out its major advantages as an information hub under the patient’s insight and control. I am convinced that there are many patient groups who will benefit from this overarching information repository – with minimal effort for patients, the medical and dental professions, pharmacies and nursing, and, in the long term, all other professional groups involved in the care of patients. Therefore, I appeal to health care providers to encourage as many patients as possible to open an ePA account with their health insurer, thereby allowing patient information to flow in the patient’s favor. After all, it’s easy for healthcare providers to use, and the information they gain is clear. And at the same time, patients can easily exercise their data sovereignty, even without IT knowledge, and control which institution should have access to which data in their ePA and for how long. This was very important to us during the design phase: anyone who can use a debit card can also control access to their ePA.

Should everything then be run via the ePA?

No, of course not. In healthcare, there are many direct communication relationships that must remain under the control of the healthcare providers. Think, for example, of the referral with the doctor’s letter in response, or the lab order with the lab results on the results. These must reach the physician directly. Copies of these can – and ideally should – also go into the ePA. But first, it has to go direct. This is where, also in accordance with the KHZG, secure communication in medicine, or KIM for short, comes into play.

Is everything good with ePA and KIM then?

They are already moving a lot in the right direction, or rather they are making a lot possible. But in fact, the entire system is still too rigid and far too limited by law. To enable true end-to-end processes, the legally regulated systems – especially the ePA – must open up significantly. We need an ePA that, as an open platform under the control of the patient, accepts any application that the patient wants to access and interact with their ePA. A complete ecosystem should emerge with the ePA as its foundation. With the empowered citizen as sovereign who can decide on data flows and connectivity. With such an ePA platform, patient-centric digitization could actually become fully possible.