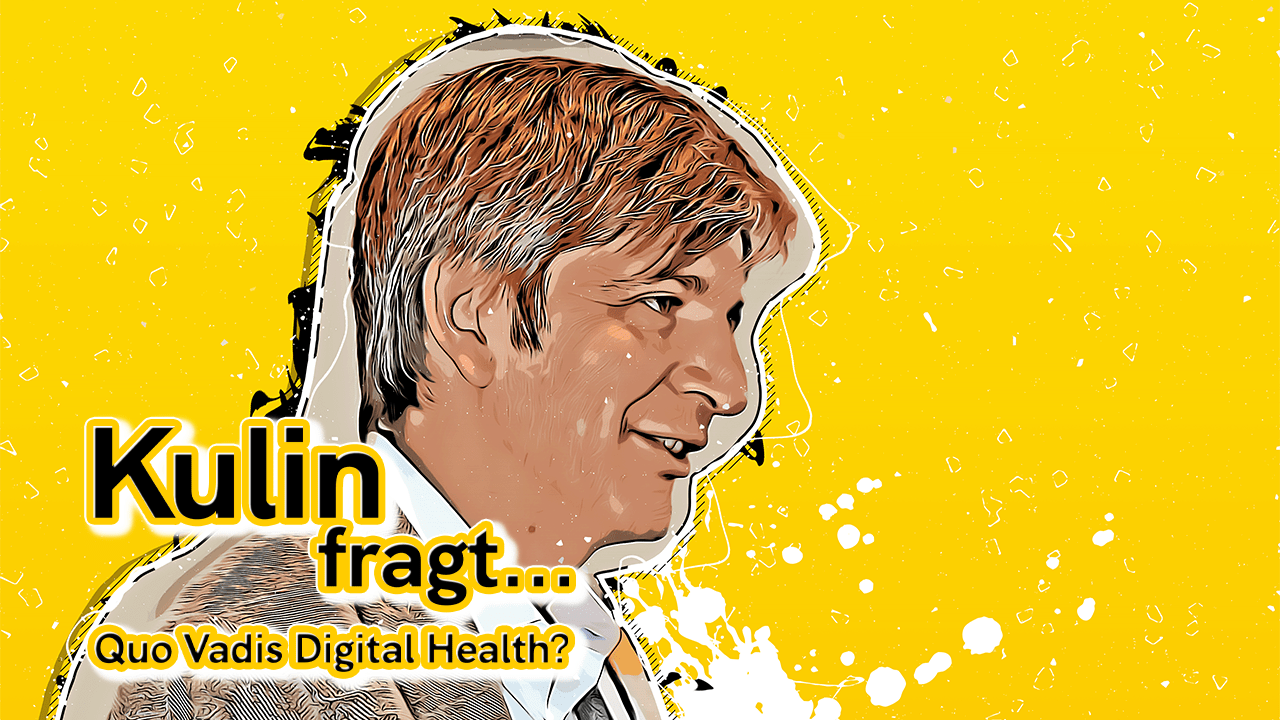 At the age of 18, you – and women – come of age in Germany. The telematics infrastructure, on the other hand, is still in its infancy in its 18th year, says KBV board member Thomas Kriedel. Are we perhaps pursuing the wrong interests when it comes to digitization in Germany? A question for Quo Vadis Digital Health in May.

In case you haven’t read or heard KBV board member Thomas Kriedel’s “incendiary speech” on the telematics infrastructure: His words were clear and so not at all politically correct. He spoke of “catastrophe,” called Spahn’s digitization policy an “air act” and demanded a “fundamental change of course.”

It should come as no surprise that an association does not agree with political decisions, measures or regulation. Nevertheless, it is worth analyzing this clear criticism, because it highlights some important points that are currently causing problems in the area of digital health in Germany, where we currently stand as an industry and shapers, and where we need to make improvements, but it also very clearly shows the self-image of interest groups such as the KBV – ideal for Quo Vadis Digital Health in May.

No acceptance, no digitization

Whether it’s the TI, ePA, e-doctor’s letter, e-prescription or the electronic certificate of incapacity for work – nothing works, according to the Association of Statutory Health Insurance Physicians. Kriedel speaks of technology failures, disruptions and disruption of practice processes. “Almost 4,000 hours the TI or individual components and services did not run, within a little more than a year,” he elaborates in his speech.

And this is where he addresses what I consider a crucial point: technology is supposed to make our lives and work easier. If it doesn’t do that job, what purpose does it serve at all? This brings us to the statement I often make, because it is absolutely correct and important: digitization is not an end in itself. How are we going to convince doctors, nurses and others working in the healthcare sector of the benefits of digitization if they have no added value in their day-to-day work, only extra effort and costs? The KBV is now talking about 9,000 euros per practice that have already had to be paid on top for the TI.

What he forgets to mention, however: In many places, the KBV itself is a “preventer” of digital progress, for example because the required solutions do not comply with scalable standards, do not rely on open interfaces or are not up-to-date. The saying comes to mind here: He who sits in a glass house should not throw stones – or at least they should not be too big.

Instead, we – and by that I mean the entire healthcare sector – should focus on what is so beautifully called user- or customer-centricity in technology-speak. Because that is one of the core elements when it comes to determining whether a solution will prevail. This is exactly what the KBV board confirms in its speech. And it is precisely here that we still have some homework to do in many places in Germany, as he points out. In my view, this also applies to the KBV: more user-centricity, less lobbying and protectionism for existing structures.

Too many interests, too many compromises

What the incendiary speech also underscores, however, is that the interests in the healthcare system are, let’s call it, broad. This is shown above all by the example of the heatedly discussed e-prescription. A June 1 gematik press release states: “As of September 1, 2022, pharmacies throughout Germany will accept electronic prescriptions. In Schleswig-Holstein and Westphalia-Lippe, e-prescriptions will then be issued in pilot practices and hospitals, ramping up to a nationwide procedure. The gematik shareholders unanimously agreed on this first stage of the rollout on May 31.” Behind the scenes, this compromise was hard fought for, according to reports. For example, Wirtschaftswoche reports, “After more than four hours of discussions, the shareholders unanimously approved a resolution. Accordingly, the e-prescription will be launched from September onwards in the regions of Schleswig-Holstein and Westphalia-Lippe with intensified tests – but without mandatory participation by doctors’ practices. According to reports, the National Association of Statutory Health Insurance Physicians (KBV) prevailed here – and in return agreed to the project despite major reservations.”

If gematik were a true innovator and the eRecipe were “the next big thing,” the mix would certainly be different – not because innovative minds don’t make mistakes or don’t face hurdles. But as a rule, they have to align themselves much more closely with the market and, above all, with the customer, and are therefore less likely to get lost in (political) conflicts of interest. What I’m trying to say is that many of the digitization projects that are well conceived or well-intentioned by the government also fail to make headway because the interests of various groups take precedence over the needs of the actual users. Because at the end of the day, the only thing that matters in healthcare is to provide patients with the best possible care and/or to keep them healthy. And anything that contributes to this goal should be seen as positive per se, shouldn’t it?

TI must not fail

At this point, the KBV should also take notice. Although it has a duty to represent the interests of its members, comprehensive patient-centeredness should also be high on the list of its members’ interests. I think we should ask ourselves what overriding goal we want to achieve and whether our own interests should not even be subordinated to this goal. Because if we miss the international boat because of all the lobbying and a project like the telematics infrastructure is still in its infancy after 18 years, something is fundamentally wrong. However, I dare to doubt whether Kriedel is right when he calls for “a new legal framework with fundamental changes of course for the future design under the keyword TI 2.0”. In my opinion, we should just do it and try less. The best example is NASA, which has tried a lot and now has its manned flights to the ISS space station carried out by a private company. Because that’s just what they did.

Against this backdrop, I also find it exciting that Sebastian Zilch, the former managing director of the German Federal Association for Health IT (bvitg), has now moved to the Federal Ministry of Health. There, he will be responsible for the gematik, TI and eHealth subdivision. This is an exciting move because he has spent the last few years as a spokesperson for a lobby group, and it remains to be seen whether he will take off these glasses and put on the patient’s glasses instead. There is a real danger that he will be caught between the various interest groups in the healthcare sector and literally be ground down. For the progress of digitization in the healthcare sector, it would be desirable if he succeeded. After all, a new edition of the telematics infrastructure is important – but not under purely state control, as Kriedel’s comparison to the electricity, gas or water network might suggest. If we want to establish a TI 2.0 in less than 18 years, all stakeholders must work together and pursue one interest: The best possible care for patients.